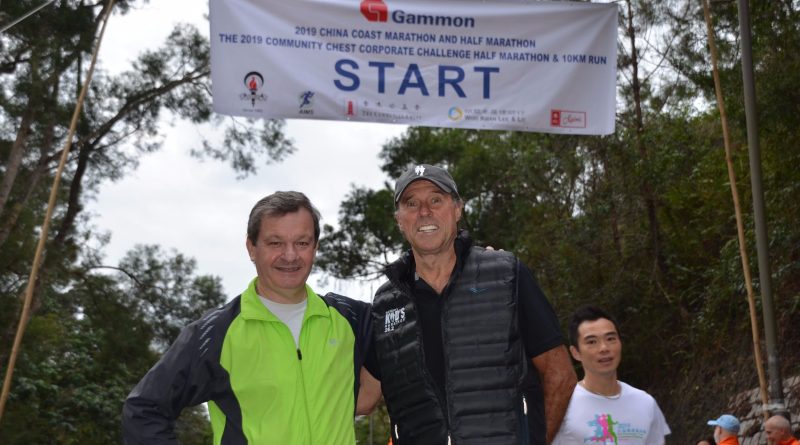 When we invited Colin Whittington to share his Runner’s Story, we held our breath … Yep, Colin defines the word ‘Veteran’ in AVOHK! We actually heard that Netflix wants the rights to this Post as they’re considering adapting it for a series simply called “Whittington”.

So here’s Colin in his own words – grab a coffee and get comfy, you’re in for a treat, as Colin picks up his story at the tender age of 21 …

I started running in 1978 at the age of 21 when I was based with the British Army in Rheindahlen, Germany.  I joined a group that trained at lunchtimes, initially just to keep fit.  I had done some running before but never on a regular basis or with any thought or structure to it.  There were a lot of experienced runners within the group and apart from lunchtimes some of us met on Sundays for a long run over a very hilly course at Dulken Woods (8 big hills per 10k loop). The area we trained in at lunchtimes was superb, within minutes we were in the forest on some wonderful trails and quite flat. During the winter we raced on Wednesday afternoons in the local forces’ cross-country league.  In my first season in 1978/79 I was lucky if I finished in the top 100 but by 1981/82 season after 3 years of regular training, I was able to make the top 10 in some races.  During those early years I also started doing some track in the summer but really lacked the speed in the shorter races.  So added more speed and speed endurance track work to my training.  That really paid off and managed to reduce my 5,000 metre’s time to 15 mins 33 secs.  I was fortunate there were a lot of good people to train with. Along with the long Sunday runs this really prepared me well for my first marathon in 1981 at Enschede in the Netherlands.  A flat and very fast course but held in July and the weather was quite warm. I finished my first marathon in 2hrs 37mins.  I slowed a lot towards the finish, but I was happy with the result.   I was asked to be part of a small forces team to run the 1981 Athens marathon.  The original course from Marathon to Athens.  My time was not that great, but the experience was unforgettable.   In September 1982 I moved back to UK and in October that year I ran my best marathon time of 2hrs 33 mins at the City of Gloucester Marathon for 12th place.  In UK I joined a local running club Telford AC and enjoyed running in the 3rd Division of the Birmingham cross country league.  Telford won the league in the 1982/83 season.  Telford AC also qualified for the 1982 UK national six stage road relay finals.  I really enjoyed being part of the team and regularly attended their weekly club run.  I also competed for my local unit in the local West Midlands Police Cross Country league.

In July 1984, I was posted to Hong Kong and lived in Blackdown Barracks in San Po Kong, very close to Kai Tak Airport.  Not the ideal place for training but I found some good routes near the airport and made regular trips to train at Shing Mun and Shek Lek Pui reservoirs and the catchment path just off Tai Po Road.  Wonderful places to train. I also joined Phoenix AC a local running club that competed regularly in the HKAAA Cross country league and other HKAAA events.  Phoenix won the Hong Kong National Cross-Country championships in the first year I was with them.  In the mid 80’s there was a thriving HKAAA Cross Country league during the winter and most local running clubs entered.  Races were primarily held at Army bases in the New Territories and around Shing Mun Reservoir.  The club asked me to represent them at the HKAAA committee meetings.  I think it was in 1985 I ended up being co-opted onto the HKAAA distance running committee.  I was fortunate there were a few old hands on the committee, Nick and Maggie Brooke and also Mike Field.  During my time in Hong Kong, I also competed on Wednesday afternoons in the local forces’ cross-country league.  There was quite a depth of talent including some strong runners from the Gurkha’s and RAF.  In mid 1986 I was asked to take on the role of Hong Kong Forces Cross Country Secretary and decided also to put together a Hong Kong British Forces Team and enter the local HKAAA Cross Country League and Championship.  We had around 20 in the team from various forces units in Hong Kong.  All had to be registered with the HKAAA. We were fortunate to get some valuable kit sponsorship from New Balance.  In the 1986/87 season the British Forces won the HKAAA Cross Country League and the HKAAA Cross Country Championships.  We finished the season off by having a trip to Singapore and competing across the border in the Desaru Half Marathon where Chong Ba Sherpa and Ati Limbu finished 1st and 2nd in 1 hour 8 Mins.  I left Hong Kong in May 1987 not realizing at the time that I had met my future wife.

Back in UK and from mid 1987 to Oct 1993 I continued to compete in local forces Cross Country leagues and ran for Bicester Athletic Club.  One highlight during this period was competing in the 1989 Ben Nevis race.  Unusual terrain for me, but good fun. I left the Army in 1993 and went to work in Zagreb for 18 months.  I was fortunate to find a few friends to run with at lunchtime.   Not too many local races but still kept up Sunday long runs.   In 1995 I went to work in Oman for 2 years.  Wonderful location but incredibly hot in the summer (over 50c).  The winters were lovely.  I joined the Muscat Road Runners and although not many local races the club met three times a week at different locations for some social runs, time trials and club races.  During the winter we would organise some longer events and have our own club league.  A real social atmosphere.  Prior to my last year in Oman someone kindly volunteered me as Chairman.  One highlight was the club putting on a club relay race from Sur to the Beach Club in Muscat.  Around 210 Kms following the main Sur to Muscat Road.  We had 2 teams and each runner would run several 5k stretches during the day.  We started at around 4.30am after camping out over night at Sur and managed to make it to the Muscat Beach Club by around 7pm.  Followed by a hot shower, BBQ, and some beers.  I still have the T-Shirt.

After leaving Oman in May 1997, I spent some time in UK and a year or so in Singapore before deciding to come back to Hong Kong in November 1999.  I was still doing some running to keep fit but not that competitive.  Soon after arriving back in Hong Kong, I joined AVOHK and paid my HKD 1,000 for life membership.  I didn’t race too often for AVOHK, but I did manage to make the team for the 2001 Sedan Chair Race.  That was incredibly tough and an event AVOHK dominated for over 20 years.  I have always enjoyed helping at AVOHK races, being on the committee and in 2016 took up the challenge of being Chairman of AVOHK for 5 years (2016 to 2021).   I don’t run much these days due to a knee issue that occurred around 7 years ago.  I do enjoy watching athletics and have been fortunate to attend two Asian Masters Championships (2017 Rugau and 2019 in Sarawak) and the 2018 World Masters Athletic championships in Malaga.  I very much enjoy the sport.