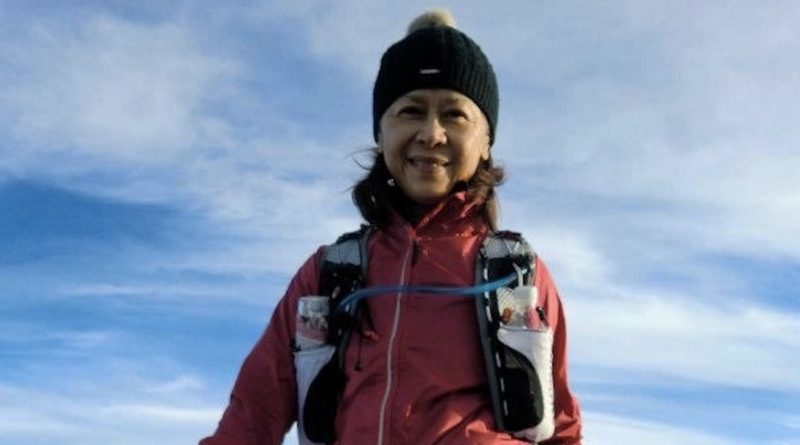 Our club has a diverse membership with runners from almost every corner of the globe. In our new column we will be looking at the stories behind the familiar faces of our members.  In our first article we learn more about one of our 2022 Athletes of the Year, Evelyn Lim.

It’s hard to think of an AVOHK race where Evelyn hasn’t featured!  From the China Coast Half Marathon to the 5k Series and even track meets at home and overseas, she can be seen sporting AVOHK colours with a broad smile.

Evelyn was born and raised in Malaysia and worked in England for 10 years as a nurse and midwife.  She came to Hong Kong in the 80’s to work for Cathay Pacific and it was while working there that she began running with a colleague.  Reluctant at first, she soon caught the bug and hasn’t stopped running since!  It was also while working at Cathay that she met her husband and fellow Athlete of the Year, John Fowler.  John suggested joining Ladies Road Runners Club and from there they joined AVOHK in the late 80s.  From her first race, a 5k organised by Cathay, Evelyn has moved up through the distances racing 5ks, 10ks and marathons.  She even completed the famous Trailwalker alongside John and 2 other medical colleagues in 2000.  Evelyn recalls that their team had a fantastic buffet catered by The Mandarin Oriental Hotel at the end of Stage-3, but John didn’t want her to eat it.  This proved to be a wise decision when their teammate threw up shortly afterwards!  They finished as a team in 25.5 hours.

When asked about her most memorable events, Evelyn lists the mountains she has summited, including Kilimanjaro, Kinabalu and Mount Fuji.  Although she struggles with altitude sickness, she explains that she perseveres as she loves the challenge and adores the sunrises.  Even now, with the current travel restrictions in place, Evelyn can often be seen out exercising at dawn in Sai Kung Country Park where the sunrises are often spectacular.

Both her husband, John, and fellow AVOHK runner, Rachel Sproston, have inspired Evelyn in her running journey thus far.  As anyone who knows them can attest, John and Evelyn have a great, healthy rivalry.  Evelyn says that his endless support and great sense of humour has inspired her to follow her passion.

Evelyn has a great respect for Rachel, who has not only had an impact on her running over the years, but also introduced Evelyn to the French language and taught her for 2 years after Evelyn met and connected with a friend’s mother in France.

Evelyn has never had a running coach as she “hates to be pushed or add stress”.  Instead, she exercises almost every day, with a mixture of yoga, track sessions, gym, cycling, weights and longer runs.  She says that the most important thing is that she enjoys everything that she does.  “Running is not easy, but it’s worth it!’

Thanks for reading about our club treasure, Evelyn.  Watch this space as we share more Running Stories featuring AVOHK members and committee members!